We the members of Telugu Association of Greater Kansas City, and subscribing to the regulations and policies of State of Kansas, establish this Constitution to govern the matters within our organization.

The name and title of this organization shall be Telugu Association of Greater Kansas City, herein after called TAGKC. It shall be a not-for- profit organization registered under the laws of the State of Kansas and shall exist in perpetuity. The “Telugu Association of Greater Kansas City” will be referred to as “TAGKC” from here onwards in this document.

Section 1: The objectives and purposes of TAGKC shall be:

A.    To preserve, maintain and perpetuate the heritage of the people of Telugu origin.

C.    To collaborate, cooperate and assist in the organization of periodic Telugu literary, educational and cultural conferences.

D.    To foster friendship and understanding between Telugu speaking people and other regional communities.

Section 2: The TAGKC shall have all powers of the corporation organized not for profit, as are now or shall hereafter be conferred by the statutes of the State of Kansas.

Section 2: The membership can be accepted at any time of the year and is good for one calendar year. Membership cannot be transferred or applied to any one including relatives & friends in case member could not avail the benefits at that time.

Section 3: There will be two types of memberships:

a.Be nominated for the post of the President of Executive Committee or Member of Board of Trustees.

b.To serve on the Executive Committee in various positions.

c.To vote for any amendments in the bylaws

d.To vote for the new Board of Trustees.

e.To recall members of Board of Trustees or the President of the Executive Committee. When there is a tie to revoke the president, the board will call for a meeting of the life members.

There are three (3) categories in General Membership. Upon the recommendation of the Executive Committee, additional membership categories can be added subject to approval by the Board of Trustees.

Article IV. Board of Trustees

Section 1: “The Board of Trustees” hereafter referred as “The Board”, shall consist of Seven (7) members, of which 6 (six) members will be elected by the Life Members and the seventh one will be the president of the TAGKC Executive Committee.  The president cannot hold the Chair Person position.

The term of each of the Six (6) Trustees shall be two (2) calendar years. Every year, based on the number of open Board positions, there will be an e-mail sent by the Elections Committee requesting nominations for new Board Members. The nominee for the Board of Trustees member should be a Life member with full dues paid for the current year.  If there are more nominations than open board positions, there will be election conducted by the election committee.

Section 2: The Chair Person will be elected by a majority vote of the existing Board. In order to serve as Chair Person of the Board, he/she should be a member of the current Board for at least one (1) calendar year with full dues paid for the term he/she served in the Board, and cannot be exceeding the overall maximum term. If there are two (2) members contesting for the Chair Person, then there will be an election within the board by the Board Members. If more than two (2) members express their interest for becoming a Chair Person, then there will be an election for these candidates by the Life Members.

Section 3: The Board shall meet at least once annually to review functioning of the Executive Committee, formation of new Executive Committee and to fill in the retiring Board positions. The Board can meet any number of times as needed.  The meetings shall be chaired by the Chair Person and proceedings shall be recorded & maintained by the Secretary to share with the Board and Life Members if needed.  The Board of Trustees shall meet to resolve any matters at any time during the year as necessary.

Section 4: There will be an independent 3 member Election Committee that will be selected by the Board of Trustees. The election committee member(s) should be Life/General member(s) with full dues paid for the current year. The Election Committee will be responsible to gather information about the nominees and present it to the Life Members for a vote. The voting can be asked via e-mail, regular mail, or in a special Life Members meeting.  The elected new Board of Trustees will replace the retiring Board of Trustees after the due process is complete.

Section 5: Once a board member finishes his/her term, they cannot be nominated to be on the Board for a period of 2 years. Overall maximum term of a board member serving in various positions (Chair Person or Secretary) shall not exceed more than four (4) calendar years in a row.

Section 6: The Board shall have control of all the properties and funds belonging to TAGKC. The power and authority to expend the funds of TAGKC will be delegated to the Executive Committee on a yearly basis.  Budget for the events should be approved by the board prior to every event. The Chair Person should communicate to the board about the event amount. The $ amount may or may not be fixed

The responsibilities include the following:

Section 3: The President selects at least the following and maybe more office bearers to the Executive Team. These include but not limited to Vice President, General Secretary, Joint Secretary, Treasurer, Program Committee Chair Person, and members at large including Past President as an ex-officio member.

Section 4: The President: The President shall be the principal executive officer of TAGKC and shall preside all the meetings of the Executive Committee. The President may appoint ad hoc committees as and when necessary.

Section 10: Election Procedure: Once the vacancy of the President of the TAGKC is available, the Board appoints a three (3) member Election Committee.  The election committee member(s) should be Life/General member(s) with full dues paid for the current year.  The Election Committee will send a letter (or E-mail) to all the current paid members of the TAGKC for nomination for the Presidency of the TAGKC. There will be a deadline (usually 2 weeks) mentioned in this notification for the nominations. The criteria for the nominee for the position of President of the Executive Committee include TAGKC member (Life /General) should have served at least two (2) calendar years out of the last five (5) calendar years in the Executive Committee with full dues paid for the term he/she served in the Executive Committee and also for the current year. If the nomination process results in more than one candidate for the President of the Executive Committee of TAGKC, the Election Committee will scrutinize the candidates and propose a slate of candidates for election. TAGKC members (Life /General) will be given a deadline by which to cast their vote via e-mail, regular mail or by attending a special meeting of the General Members (as needed) to complete this election. These elections shall be conducted during the month of November of the current year and the results to be announced by January of the following year.

Article VII: Duties of the Board and Executive Committee

•Duty of Care: Take reasonable care when making decisions for the TAGKC.
•Duty of the Loyalty: Act in the best interest of TAGKC.
•Duty of Obedience: Act in accordance with the TAGKC’s objectives & purposes.
•Recusal: Stand aside when there is a conflict of interest.

Section 1: Annual Meeting: Meeting of the TAGKC General Members during yearly Ugadi Celebrations would be considered as an annual TAGKC meeting. Both the new and current Board of Trustees and Executive Committee team members would be introduced at this meeting. There should be a meeting of Life Members once a year in December.

Section 3: Notification & Quorum: Members shall be notified of the time, place and the agenda of all meetings. One third of the total voting members present in person or vote via e-mail shall constitute a quorum. If a quorum is not reached because of lack of attendance at a meeting or vote by e-mail, TAGKC Board will validate the majority vote obtained by those present and by those voted by e-mail. No proxies shall be permitted.

The TAGKC shall have a common Seal with power to break, change or renew the same when necessary.

Section 1: Resources and Properties: The resources and properties of the TAGKC should not be used by any person including TAGKC member without the written approval/e-mail from both Chair Person of the Board and the President of the Executive Committee (Chair Person and President should have the approval from their subordinates (letter or e-mail or in meeting)). Appropriate action will be taken against violator(s) and accomplices.

Section 2: Member information update: It is the member’s responsibility to update their address or notify their current information to the TAGKC by e-mail, phone or regular mail. The website (www.tagkc.net) will have the provision to update.

These Articles of Bylaws can be amended at any Life Members meeting or via e-mail to the Life Members. The proposed amendments shall be notified to the voting members prior to the meeting. If done via e-mail, there will be reasonable time given to provide response. There shall be at least one third of the total voting members present in person or vote via e-mail to constitute a quorum to amend the Bylaws. If a quorum is not reached, because of lack of attendance at a meeting or vote by e-mail, such meeting may be recessed to a specific date, time and place, from time to time, by a majority of the votes present in person. No proxies shall be permitted.

In the event of dissolution of TAGKC, TAGKC shall, after paying or providing for payment of all liabilities under Sec. 501 c (3), transfer the funds and assets to another not-for-profit organization as approved by life members. 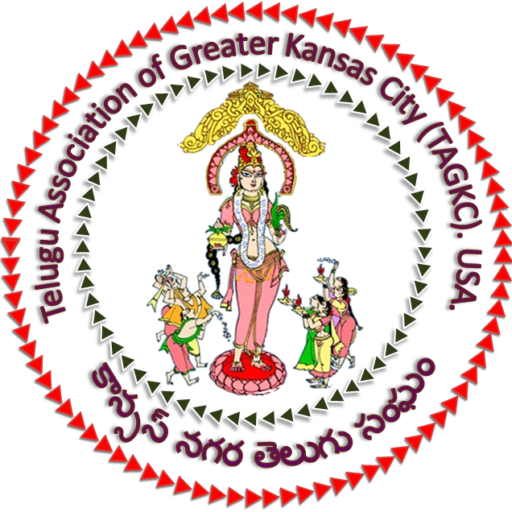 Our main purpose is to promote Telugu culture and to preserve, maintain and perpetuate the cultural heritage of the people of Telugu origin
Facebook-f
Twitter
Youtube

Service to community and volunteer participation is at our core